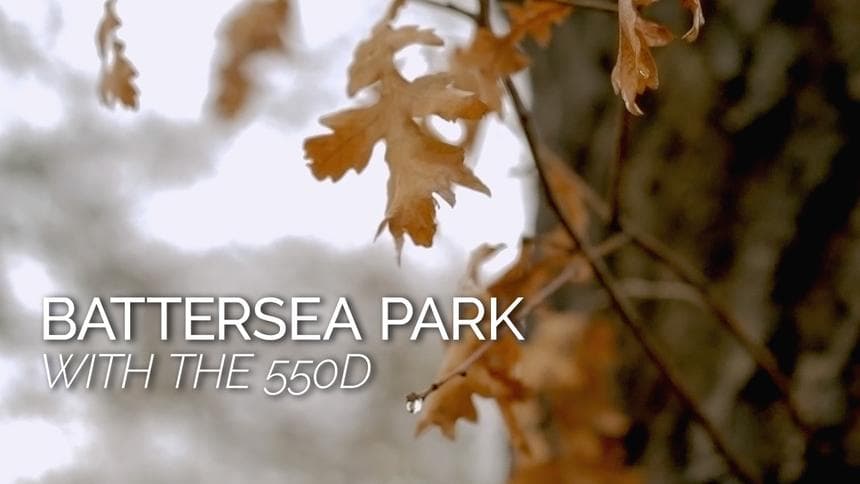 Battersea Park with the 550D

I've not used my 550D for filming in quite a while, so I dug it out and took it along on my walk in Battersea Park and made a short video from it.

I've recently been editing a few videos from various trips around the world and when I've been going through my footage I realised that most of it was shot on my GoPro, despite having the 550D DSLR with me. Looking at that I'd say that the 550D footage makes up for about 1% of my total footage - which really isn't very much.

I've also started planning on making a short film with some friends this year on a narrative film project, rather than a travel edit or the other sorts of video I create. It's exciting to be starting on a narrative project as its something I've always wanted to work on since I bought the DSLR years ago - in fact its the reason I bought it - so I decided to get outside with the camera and re-familiarise myself with it all.

Here's the kit I took out with me:

Again, I've not used Cinestyle in a long time so wanted to practice shooting with that and colour correcting it. I've been practicing colour correction when I've edited the travelling videos so I felt more comfortable shooting in this mode too.

The editing was pretty straight forward, I found a track on the freemusicarchive, imported the footage and started editing. One thing I wanted to try was a slow motion edit. I was shooting at 50fps and outputting at 24fps so I slowed all the footage down to 50% and kept smooth motion on the slow motion. I did try slowing everything down to 25% and using Final Cut Pro's Optical Flow slow motion option - which came out with some nice results, but that was too slow, so didn't use that in the end. I did still use Optical Flow on the first shot of the Battersea Park map as I managed to film that at 1080/24fps so I couldn't slow it down without it looking stuttery.

Colour correcting went well, and Simon Cade's video on Cinestyle was useful. As well as showing how he typically grades the shot, he also mentions how to expose the shot - saying that you should expose so that you are exposed just under losing the highlight detail, rather than exposing for it to look correct in camera. This is what I did for the shot of the tree and the puddle underneath it - and like Simon suggests there is a lot of noise in the shadow areas.

It was nice to get out with the camera and start using it again. I wasn't too impressed with the picture quality out of the camera for some of the shots, but that could be a few things.

Firstly the camera is coming up for 6 years old and maybe image quality, sensor technology etc are starting to show their age compared to newer cameras out there.

Secondly, the other cameras I have are a GoPro Hero4 Black - which is just over a year old and shoots up to 4K - and an iPhone 6 which can shoot 1080p up to 120fps and 720p at 240fps - so I think my standards of image quality have raised a bit since I first bought the 550D. It would be interesting to do a camera comparison between the 3 of them and see how having changeable lenses, depth of field and more control over image settings from the 550D weighs up against the picture quality of the GoPro and the iPhone. If this narrative film project comes together and I start doing more like that, maybe it will be time to upgrade the 550D to something newer.